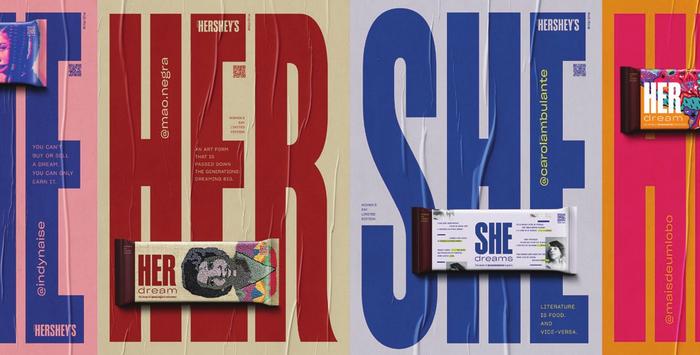 Hershey's considered recognition of women to be a fundamental part of its DNA. CEO Michele Buck led a company in which 52% of the employees were women. However, elsewhere in Brazil, women were not so well represented. According to MASP, São Paulo’s Museum of Art, only 6% of the works of art on display in Brazil were by women.

Following the success of the HerShe project in 2020 and to support female artists who had struggled in the pandemic, the 2021 platform set out to celebrate women who dream of making a living though art.

Using the pronouns "HER" and "SHE" within the brand name, Hershey's transformed their packaging into a canvas to showcase the talent of eight young female artists who dreamt of making a living with their art. 320,000 bars were the starting point of a platform for supporting female artists throughout Brazil. Workshops and mentoring for female artists were created in partnership with consultancy Plano Feminino around the themes of ‘She Dreams’ and ‘Her Dream’.

The HerShe bars sold 692% more than the brand's traditional milk chocolate version. The eight artists got an organic increase of 30% on their social channels and hundreds of female artists had their work published on Hershey's Instagram and website. The platform sparked an important conversation about gender equality in the arts.

Exactly a year ago we featured Hershey’s first HerShe campaign. It was great but this is greater. We’re featuring the 2021 campaign for two reasons. One, the packaging is just fantastic. Even better than last year’s. So colourful and vibrant. Two, this is a brand sticking to its strategy and they deserve credit for it. Rather than just a one-off campaign a year ago to get headlines around World Women’s Day, Hershey’s is now declaring its long-term commitment to encouraging female artists. The fact it is re-engineering its own organisation to be a role-model of empowerment to other Brazilian companies is walking the walk.