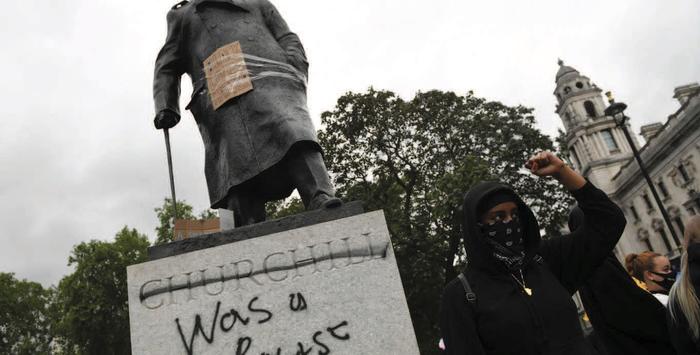 I write as the UK settles down into its second period of lockdown.

In a survey in March of this year, 69% of respondents here believed the pandemic would be done and dusted by June.

There have been riots in France and Spain in protest at the loss of civil liberties.

America has emerged from its election with its social divisions made startlingly clear.

A Washington Post poll reveals that 31% of American voters believe “it’s likely the United States will experience a second civil war in the next five years.”

Did the Chinese invent the virus?

I don’t suppose we will ever know, but while the rest of the world grapples with unemployment and debt, the Chinese economy is up 3.2% on 2019.

Their warships sail in the Straits of Taiwan, their Police suppress democracy in Hong Kong and their military have shot and killed Indian soldiers on the Himalayan border.

When people talk about the pandemic as being “like wartime”, I fervently hope they are wrong.

The irony of Covid-19 is that while countries have been closing their borders, the global village has never been more evident.

When George Floyd was killed on May 25th, there were violent repercussions in all American states.

And in London, Paris, Madrid, Berlin and Brussels.

Statues of Columbus were toppled in the USA and of former slave-owners in the UK.

Even the monument in London to “the imperialist” Winston Churchill has been defaced.

In all of this upheaval, it is inevitable that advertising should twist and turn too. Over the next few pages we share with you some of the very different responses from some very different inhabitants of adland.

As politics, markets and brands re-set themselves, advertising too has been considering what the “new” normal might be.

First, Lazar Dzamic bites deep into the hand that fed him. Usually a gentle fellow and for twenty-five years a strategist who specialised in genuine insights, Lazar is appalled by rampant consumerism and takes issue with advertising for fuelling desire and creating monumental waste.

He calls advertising executives the dogs of more.

It may well be that what we are witnessing right now is the dissipation of capitalism as described by Milton Friedman in 1970. (The sole purpose of business is to increase profits for its shareholders.)

I’m not sure if tearing down the whole damn edifice, as Lazar urges, is wise, especially as in these times of sickness, inequality, BLM and environmental ruination, many business leaders are beginning to look for a kinder “stakeholder capitalism”.

In response to his LinkedIn piece, I wrote a reply, which is included on pages 8-9.

My own belief is that advertising’s primary function is to sell stuff. In doing so, it creates competition that forces companies to improve their products and price them more keenly.

Bit by bit, people’s lives are made better by the things they buy.

What is the purpose of purpose?

The changes happening within societies across the globe have pushed Brand Purpose to the top of the marketer’s agenda.

With so many problems, a lot of people in both marketing and advertising now believe that brands should step in and provide solutions.

They should become politically active.

This, warns Steve Harrison on pages 10-12, is dangerous nonsense.

In an address to the new intake of students at London’s prestigious School of Communication Arts, he offers a distillation of his important book, “Can’t Sell, Won’t Sell”.

Steve is not an enemy of Brand Purpose.

His advertising hero, and the subject of the book he wrote “Changing the World is the Only Fit Occupation for a Man”, is Howard Gossage, who, in modern parlance didn’t just talk the talk, he walked the walk.

But he does argue that it (Brand Purpose) must be secondary to commercial purpose.

If you can sell a product and do society some good at the same time, that’s ideal.

It is also very rare.

Building on “The Empathy Delusion” and “The Aspiration Window” written by Iain Murray and Andrew Tenzer at House 51, Steve argues that most Brand Purpose is virtue signalling.

Advertising and marketing people tend to have left-of-centre leanings.

When these influence their communications plans, they end up talking to others like themselves, ignoring the right-of-centre majority.

Thus a vodka brand espousing LGBTQ causes may be admired for its stance in London, Sydney, New York and San Francisco, but it baffles ordinary people in Aldershot, Bundaberg and Charlotte North Carolina.

Agencies are in a bubble, Steve says.

They can only survive if they acknowledge their primary purpose is to sell.

In his book, Steve criticises Tim Lindsay, CEO of the UK’s leading organisation representing the interests of the creative community.

He does object to them being tweeted by Tim in his official capacity as an industry leader rather than as a private person.

This, Steve argues, is an imposition of orthodoxy rather than an expression of opinion.

No-one wins when the world’s on fire

In a webinar arranged by the School of Communication Arts, Tim was given a platform from which to reply. The video is at: https://www.youtube.com/watch?v=JQwzx4qALmI&t=22s

Tim argues that the role of agencies has become more nuanced than it ever was in Ogilvy’s “We sell, or else” day.

He also makes the point that there are an increasing number of certified B Corps around the world.

These are companies not just committed to social and environmental practices but who pay money to help build a more sustainable economy.

If business is changing, it behoves advertising to change as well.

The purpose of advertising

The final essay in our CHANGES section is written by Paul Feldwick and is a distillation of his forthcoming book “Why Does the Pedlar Sing?”

What concerns him is mounting evidence that advertising itself is losing its purpose. It is becoming less effective.

But where Steve believes this is because of intention, Paul suggests it is execution which is at fault.

Short-term, sales-driven advertising has led to what Orlando Wood in his book Lemon calls “left-brain advertising”. It is staccato, delivered to camera and often directive – do this, do that.

“Right-brain” advertising is where character, incident and place combine.

Perhaps Steve and Paul are aligned in thinking that agency creatives have become impossibly distanced from the people they should be talking to.

Great creative work used to be popular work. No longer. Creative directors seem to create work for each other. Campaigns that are clever but heartless.

In Paul’s view, advertising at its most creative is similar to showbusiness. It is enjoyable and memorable. And there is overwhelming testimony to its potency in the IPA’s Effectiveness Awards.

The IPA has suggested that the ideal split between brand building advertising and more direct, sales-oriented comms should be 60:40.

Covid has placed huge pressure on those numbers.

Arguably, adspend has probably been somewhere around 20:80, the 80% being more “left-brained”, direct response ads.

It could well be more as money drains from TV, print and OOH into digital.

You might argue that Paul’s plea for creativity is too TV-centric. After all, television advertising has declined by over 17% in 2020.

In the US, Covid has led to 74% of homes now paying for at least one streaming service.

I would say Paul’s case is still well made.

He talks about what Byron Sharp calls “distinctive assets” and those can be leveraged just as effectively in digital channels as they can in TV.

In this issue of Directory, look out for the Oreos campaign from Publicis Indonesia on pages 35.

If the black and white cookie isn’t a distinctive asset, then nothing is.

But Paul also talks about how successful brand campaigns have emotional clout.

If the character in all the Oreos ads is the cookie itself, then Coca-Cola have given us George the Poet.

Their purpose is optimism. Same for Pampers Lebanon. They too have a George, George the baby. Born in the moments after the massive explosion in Beirut on August 4th blew in the windows of the maternity hospital and extinguished power, he is a symbol of hope (page 33).

But will he sell nappies?

Will Pepsi sell more cola (page 27) when their purpose seems to be nothing more and nothing less than to give people whose lives have been catastrophically affected by the pandemic a glimmer of self-respect?

Will Burger King end up selling more Whoppers (page 49) by asking people to buy from McDonald’s if it helps protect jobs?

On the following pages do read the very decided opinions of Lazar Dzamic, Steve Harrison, Tim Lindsay and Paul Feldwick. And on the very next pages see the work that both supports and challenges their views.

And join the debate.

Because, whether we like it or not, big changes are coming.

BLM is here to stay. Hopefully.

Finally, on pages 18-20 we are proud to be able to publish an article about the Create Not Hate initiative.

For decades, advertising has been “pale, male and stale”.

Despite evidence that diversity enriches cultures and improves the profitability of companies, agency leaders have wrung their hands but done, in Steve Harrison’s words, bugger all about it.

Now the leadership team of Quiet Storm, Trevor Robinson OBE and Rania Robinson, have stepped forward. Not for them confrontation, but demonstration; demonstration of the ample talent to be found outside the white middle-classes.

Two creative teams from deprived inner-city communities have shown what they can do in just a couple of sessions with their mentors.

Their work has run in the press and on posters throughout Britain. (See pages 58-59).

Advertising in the UK used to be a meritocracy. It was kids from the wrong side of the tracks who gave the industry its reputation as a creative powerhouse. Alan Parker, Ridley Scott and David Bailey among them, not to mention agency bosses like Frank Lowe and Peter Mead.

In the 80s, agencies began to recruit from art schools and colleges. Kids from the more challenged parts of the country have neither the money no the desire to stay in education longer than they have to.

Perhaps Trevor Robinson’s own story can inspire kids from BAME backgrounds to come and wake the rest of us up. Perhaps it can also inspire the network companies and the industry’s major institutions to put money into turning his programme into a shared mission.

We live in hope

And that’s what unites all of the contributors to this issue of Directory. However their opinions may differ, they all believe in their different ways that in creativity is our salvation.

Bring on the future!