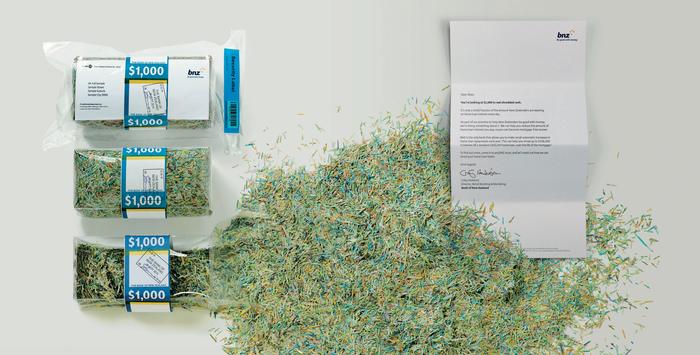 As part of BNZ's promise to help New Zealanders be good with money, the bank wanted to jolt people into tackling their biggest financial commitment – their home loan. Most New Zealanders had no idea how much money they were wasting on unnecessary home loan interest.

Every day, billions of dollars in old banknotes were destroyed by the world's major banks and turned into waste. The idea was to salvage some of that waste and make it valuable again.

Collaborating with the Reserve Bank, $1,000 of real shredded cash was put into bundles and delivered to homeowners across the country with a letter explaining how a BNZ Tailored Home Loan could help them prevent such waste and save $156,000 on a typical $300,000 home loan.

Millions of dollars in worthless shredded money was recycled into a simple campaign, which is not just saving New Zealand home owners hundreds of thousands of dollars, it increased BNZ mortgage lending by $600 million.

On the submission video for this campaign, you can hear the squeals of shock as homeowners realise they have a thousand bucks in their mailboxes. The imagination instantly reassembles the notes and sees it as hard cash.

Therein lies the extraordinary effectiveness of the idea, in allowing people to weigh up for themselves, literally, the cost of sticking with their existing mortgages.

What makes mail such a great medium is its physicality. In this instance, Kiwis everywhere would have turned the pack over, would have thrown it to someone else in the kitchen, would have laughed and would have started to think hard about their mortgages.

This is a brilliant demonstration of how direct mail drives bottom line numbers. I doubt any other campaign in this issue of Directory is worth even even a fraction of $600m.