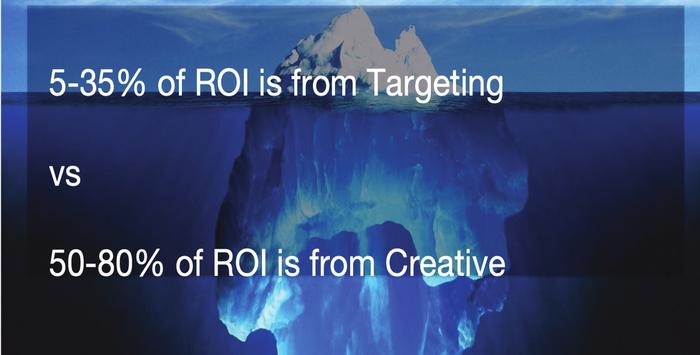 There’s a chart I used to see regularly when I was a Googler.

For some reason it was an image of an iceberg.

The caption read, ‘Up to 70% of the success of any digital campaign is down to the creative.’

It’s the chart that never dies.

I keep seeing it.

That’s inflation for you.

It’s a chart that media people share with each other.

When I ask them to explain its meaning, there’s a bit of mumbling.

Someone at Google created this chart back in 2017 because there was a problem.

There is a problem.

And it is that across the Google Display Network most of the ads are bad.

Poorly designed, over-complicated and, for the most part, unnoticeable.

Despite it all, they sort-of work.

Or maybe it’s simply the sheer volume of ads that get sprayed out by a brand manager who can buy a zillion impressions for next-to-nothing.

One or two in every thousand are bound to stick. Enough anyway to give okay-ish results.

Okay is the enemy of good.

Imagine for a moment of what could be achieved with Programmatic if the creative was half-decent.

Did you spot that innocent little phrase?

That’s what it’s referred to by media planners. It’s just the coloured stuff that fills space. And it can be any old drivel, no-one seems to care.

But creative is an adjective. It describes how interesting (or not) your message is.

And the noun it is related to is creativity, which is what you need if you want your advertising to perform better than okay.

On the left, the creative. On the right, applied creativity.

On the left, a message that is limp in every way. On the right a provocation and one of the most famous (and successful) press ads in UK advertising history.

The same principles apply to display.

Here’s an ad I was served recently. (The name has been changed to protect the guilty.)

It’s a recruitment marketing agency trying to tell me they help companies hire and hang on to talent.

Last summer, if you’d wanted to take advantage of the heatwave to sell your cool-air fans, the creative might have been: Keep cool in this hot weather with a FabFan.

Me, being a creative person, I might have tried a different approach.

This is an adaptation of the great press ads of all-time. Agency: The Leith Agency. Copywriter: Gerry Farrell. Year: 1984.

Now there are those who think creativity is a synonym for expensive.

Too time-consuming and too difficult in digital, they say.

Rollocks is what I say. (Or something similar.)

Just look at the decision tree in any good creative management platform and you’ll see that ringing the changes is relatively easy.

You really can personalise at scale.

And that’s when your performance scores go through the roof.

With the creative, the average CTR across the entire Google Display Network is a risible 0.05%.

But with a bit of creativity it should be possible to shift the decimal point sideways to 0.5%. Shouldn’t it?

C’mon, attracting the attention of just two people in every thousand cannot be beyond the wit of man. Can it?

Mind you, as third-party data dries up, brand owners are going to be forced to start thinking more creatively.

They’re going to want to capture lashings of first-party data.

But who on earth is going to surrender any information about themselves to a brand that comes across as not merely uninteresting but uninterested?

Nothing says we don’t give a damn about you faster than a badly targeted and badly conceived ad.

Like the one for a bacon brand that popped up on the home page of a website dedicated to Jewish news.

Yes, it did attract attention but not in a good way.

Creative isn’t a noun. It’s a courtesy and very soon it will be a necessity.