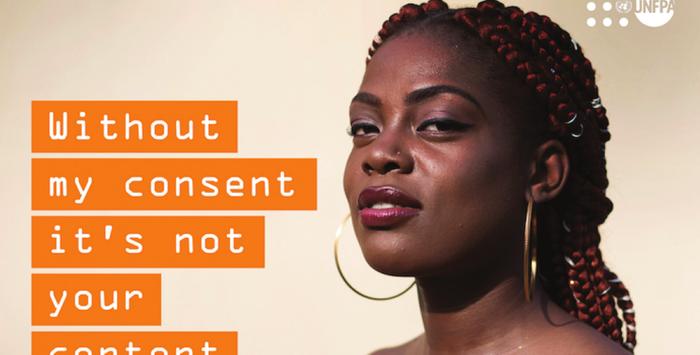 Globally, 85% of women have reported witnessing online violence and nearly 40% have experienced it personally – and the problem is growing.* UNFPA (United Nations Fund for Population Activities) sought to increase awareness and mobilise activism among Gen Z through a social campaign that would run during the 16 Days of Activism Against Gender Based Violence (November 25th to December 10th).

* Source: all data referenced is taken from Economist Intelligence Unit, 2020: Study only surveyed 18+

In most societies, laws are designed to respect bodily autonomy and the fact that we are the sole owners of our bodies. But online, the opposite is true with digitally manipulated and exploitative images of women all too common.

The insight: If women’s bodies were copyrighted IP, they would have more rights to protect themselves online than they currently do as human beings.

The idea: Bodyright, a new copyright for the human body, a symbol for change.

In a social first approach the Bodyright symbol was made as easy to use as putting a sticker on an Instagram story. It was embedded within Giphy and could be downloaded on the Bodyright website.

Award-winning spoken word poet Rakaya Fetuga produced a video issuing a call to people to sign a petition to encourage governments and tech companies to address this injustice.

It achieved an estimated global reach of 1.2 billion with 5,300 direct mentions and 79,100 engagements.

The video has been watched over two million times. The Bodyright webpage has had 1.7 million views. And the petition is on track to reach 20,000 signatures.

The paradox of the modern world is that tech intended to help us connect and be creative is also used to alienate and destroy. Cyberstalking, hate speech, doxing and faking images is rife with little to no protection for the victims. Alongside the campaign is a ‘Virtual is Real’ website (https://www.unfpa.org/thevirtualisreal) where the stories of abuse and exploitation are horrifying. It’s only through repeated campaigning that governments will eventually take action. In the UK right now the Online Safety Bill is proof of that. The USA is still a work in progress. I fear UNFPA and others still have more to do.