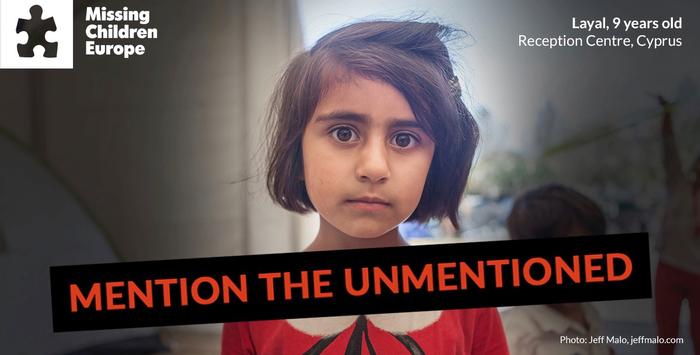 The influx of migrants has been at the centre of political discussions for many months. Among the numerous victims forced to flee their country to seek refuge in Europe are a large number of children and young people. Did you know that children constitute up to 40% of people in refugee camps in Greece in 2016? Or that more than 89,000 unaccompanied child migrants came to Europe in 2015? And worse, that at least 10,000 of these unaccompanied children have disappeared? To raise awareness about this problem together with the largest number of people possible and to urge politicians to take action, Missing Children Europe is launching "Mention the unmentioned". The campaign invites the public to take action themselves, using Facebook to ask ministers in charge to respect the rights of children in migration. The public will be made aware of how a simple notification can have a real impact on saving the lives of these children.

Left to their own devices, children missing in migration usually end up on the streets, experience homelessness, hunger and other risks that no child should ever experience. These and past experiences often have a negative impact on their mental and physical health. In some cases, they end up in the hands of traffickers or other criminal networks, and become victims of labour and sexual exploitation. In other cases, they rely on ruthless smugglers in an attempt to reach a place where they feel safe or to be closer to their family. They are forced to pay smugglers a lot of money only to be locked in the back of a lorry, or for a spot on a crumbling boat. Despite this reality, authorities in Europe have not taken sufficient measures to guarantee the respect of the rights of these children and to provide them much-needed protection.

10,000 children have gone missing in Europe.

Following crises around the world, a large number of refugees and asylum seekers have been forced to leave their homes and come to Europe, including an increasing amount of children. In 2015, at least 89,000 unaccompanied children came to Europe. Fleeing their countries, as orphans or sent by their parents, many of them have no choice but to seek refuge in Europe, sometimes with a family member already living here.

"The authorities in the receiving countries are put in charge of the child migrants that come to Europe, but these children often do not receive the protection they are entitled to by law: many live like prisoners, in atrocious conditions, become victims of violence, are not informed about their rights ... While they have the right to be reunited with their families, the procedures are extremely slow and complex. As a result, many children see no other option than to "disappear" and to continue their journey by themselves. It is at this moment that they are the easiest prey."

According to Europol, 10,000 unaccompanied children have already gone missing in Europe. Unfortunately, this figure is probably much higher in reality. Delphine Moralis adds:

"These children go missing because we do not offer them a safe alternative. And once they go missing, they are very difficult to find. Administrative barriers make an already very complex problem more complex."