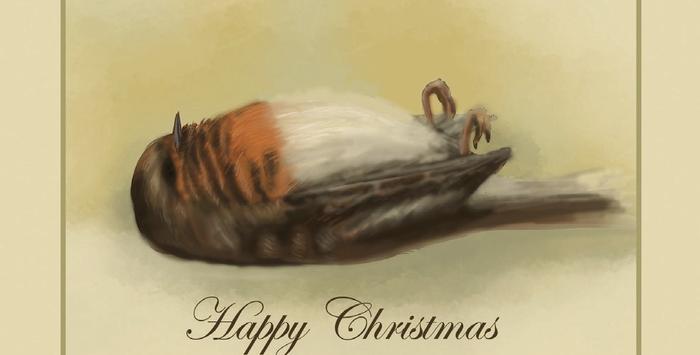 Christmas has come and gone and with it the opportunity for many agencies to impress their clients and new business prospects with their creativity.

In the past there have been some crackers – puns intended.

This year, we had several Christmas ideas submitted to Directory. Best of them was Proximity London's 'Emoji Up A Gift', featured on pages 60-61.

But full credit to Claire Robinson aka Copybird for her amusingly warped view of the festive season.

Elsewhere in adland, McGarrybowen had a similarly cynical idea for The Guardian, a competition to win a box of Brexit crackers.

On a more sombre note, McCann London were behind a series of cards for Doctors of The World, reminding us all that there is not much peace and goodwill in Jesus's old stamping ground.

Also raising money for charity, on pages 86-87 we feature Swedish agency Wenderfelck's hilarious work for Action Aid, 'All I Want For Christmas Is A Goat'.

Christmas is an opportunity to close the door behind the old year and open up to new hopes and ambitions.

It was worse, many will say.

Still, we got some good ads out of Brexit – some spoof, some which really ran.

Over on the other side of the Atlantic, in America, Donald Trump was elected despite being massively outspent by Hillary Clinton.

While 'Make America great again' is pretty fuzzy as slogans go, his proposition was rivetingly clear. Immigrants not welcome. And while he may not have run as many ads as his opponent, he showed himself to a master of PR.

The wall. What a symbol of his promise.

Incidentally, what little fun there is to be had with this declaration of racist intent can be found at buildthatwall.tech

Production company Happy Finish have created a site that lets you build and decorate your very own wall and shows how much more it is going to cost than the $15 billion estimate.

We seem to have quite a lot of work in this issue which reflects the troubled nature of the USA today.

On pages 56-57 we feature McCann New York's work for the Brady campaign to End Gun Violence. Their start-point for this campaign was the startling fact that more people in America are killed by gun-toting toddlers than by terrorism.

On pages 42-43, BBDO New York's work for Sandy Hook Promise seems to suggest, alas, that gun violence is not going to go away. The best thing to do is keep your eyes peeled for the loners who may turn one-day into killers.

On a slightly brighter note, the same agency has produced a pleasant little video which shows that despite their differences, Clintonites and Trumpists will come together if there's a dog involved.

In this issue we have 48 case studies, including ten Gold winners from the French Cristal Festival, which was held in mid-December.

In selecting the 48, we had to turn down much good work. To those who didn't make the cut, sincere regrets. But please keep sending us the ideas you're proud of.

Submitting work is free and we do what we can to get it in front of the key influencers in our industry.

Whatever happens in 2017, we'll keep showing you the world's most innovative work – before it wins awards and is widely available to view.

Thank you once again to the team for putting this edition together.

James for the design, Julie for her editing skills and Dorte for holding the whole thing together.