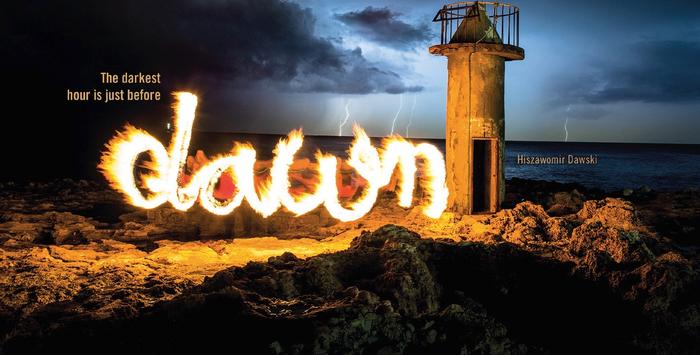 It had always struggled to keep a balance between the different religious and ethnic groups that live there. The war in Syria had not just brought an intolerable number of refugees, it also brought new tensions.

But Lebanon had overcome all its difficulties once before. It could do it again, if the country remembered what it was capable of.

A message of hope was delivered to the nation through a TV commercial and an online film. It depicted a lone flame, which could not be extinguished by wind or by rain. The message was, "Storms will always pass but the fire inside burns on."

When people went online to talk about the ad, they were encouraged to create messages using the hashtag #KeepWalkingLebanon.

The most powerful of these messages were turned into art by a fire calligrapher, spelling them out in the dark in flames. Hundreds were used as campaign visuals and many were taken up and published in newspapers and on influential blogs.

Finally, on January 1st, Lebanon's leading talk show dedicated a two-hour episode to the campaign's content changing the show's title from the 'Republic of Failure' to the 'Republic of Hope'.

Over 2,500 user messages of hope were generated. Four different publications changed their editorial stance in order to promote hope.

Lebanon is buffeted by all the storms of the Middle East. Refugees and agitators pour across the borders and the man in the street watches the tensions rise with a grim fatalism. But the country’s ad agencies have long seen their role as giving a voice to the people, be it to fight corruption, political interference or, in this instance, defeatism.

It is brave stuff and many brand owners would have retreated in a fluster from a similar invitation to provide political comment. But fortune favours the brave and it is heartening to see that patriotic Lebanese drinkers have rewarded Johnnie Walker for its stance by drinking plenty more of its product.