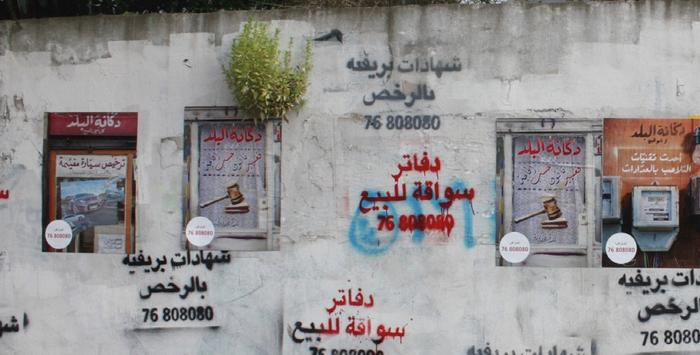 Corruption in Lebanon was endemic. The struggle against it seemed hopeless but, in truth, corruption was like any other business. The more people bought from corrupt traders, the more corruption grew.

It was estimated that 'Dekkene' bribes were running at around $4.5 billion a year.

The plan, then, was to think of corruption in purely business terms and set out to bankrupt it.

The idea was to create the Country's Shop, a place where everything anyone needed to live in Lebanon was for sale. Driving licences, university degrees, a work permit, all were available to buy.

The campaign opened with bill-stickers and posters advertising various official papers for sale and a phone number to call. A week later, in the middle of Beirut, a shop called Lebanon4sale opened up.

Simultaneously, an online movie was launched with a call to action, 'Stop the Shop'.

A 'Stop the Shop' car began driving around the country, parking outside businesses known to be corrupt. The posters now ran with the Stop the Shop line.

32 pop-up shops appeared all over the country and three vending machines in Beirut theatres dispensed documents, certificates and passes.

Within months, 1,598 reports of bribery were submitted, detailing corruption to the tune of 3.4 billion liras ($2.2m). In a country of four million people, the campaign generated 51 million impressions, earning some $2.6m in free media. 487 volunteers were recruited in 3 months. There were 2,737 downloads of the mobile app.

61,541 people saw the film on YouTube. The data gathered by the campaign allowed the Sakker el Dekken organisation to issue two reports on the state of corruption in Lebanon. In January they helped open and sustain a fully digitised and corruption-free Police station.

Creatively, Lebanon punches way above its weight and Leo Burnett Beirut is one of its punchiest agencies, winning Agency of the Year at the Dubai Lynx festival in March.

In such a troubled political environment, they have been insistent that advertising has social obligations as well as commercial needs. Recent attempts at social engineering include creating a movement to force their largely male parliament to legislate against domestic violence for KAFA, reviving pride in Lebanese ingenuity with a film about the Lebanese Rocket Society and making it an act of patriotism to drink Johnnie Walker (pages 88-89). And here, shaming both those who accept corruption and those who practice it into reappraisal.