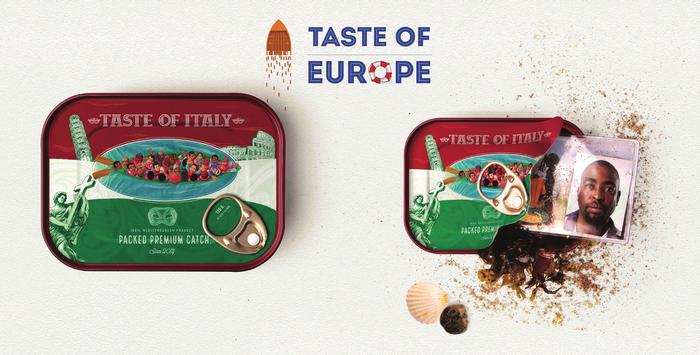 Since 2014 more than 30,000 migrants have died trying to cross the Mediterranean Sea to reach Europe. However, these estimates are only from documented deaths, wrecks, and bodies found.

Regrettably, the Mediterranean has become ‘the biggest cemetery in the world’.

New Hope Foundation is an NGO that promotes projects to help disadvantaged people gain access to first-world opportunities. Targeting migrants is almost impossible due to their political status and shifting geographical position. So a new and surprising way to communicate with people who are incommunicado had to be created, giving migrants a choice to stay in their home countries rather than having to travel abroad.

On Tangiers’ beaches, parcels were handed to migrants who were about to get on boats.

A tin of (what looked like) sardines was added. The tin was wrapped with a letter written by someone who had attempted to cross. The aim of these letters was to persuade migrants to think again about the daunting journey ahead.

Inside the tin, there was a personal item belonging to migrant floating in sea water as a reminder of what could happen if things go wrong.

After handing out the parcels, 27% of those interviewed considered changing their minds about crossing the Mediterranean. 15% returned to the migrant centres in Morocco.

10% did make it back safetly to their homes such as Abedda, Aya, Zola, Etienne and Traore.

75% of those who did take the decision to return were part of a family. Single people were more likely to attempt the crossing and the ones who decided to cross were generally younger.

The Hope Foundation did conduct research throughout its network to gauge awareness the campaign brought; among the people it helps. The figures (Feb.

’22) were that 35% of the people they asked had heard of the sardine cans.

According to UNHCR, more refugees who arrived in Europe in 2021 were from Tunisia than from any other African country. 42% of all displaced people are children. While it is estimated that at least 1,500 people drowned crossing the Mediterranean, an untold number of boats simply sink.

One report suggests the true numbers could be eight times the estimate. They refugees are, as this idea suggests, packed in like sardines.

Those who arrive face being sent back or, if they are lucky, placed in camps where they have an interminable wait for papers before the struggle begins to find work. Not to mention xenophobia wherever they go.

For many, life in their own countries may seem bad but if they can be persuaded not to board the traffickers’ boats, they are probably better off.