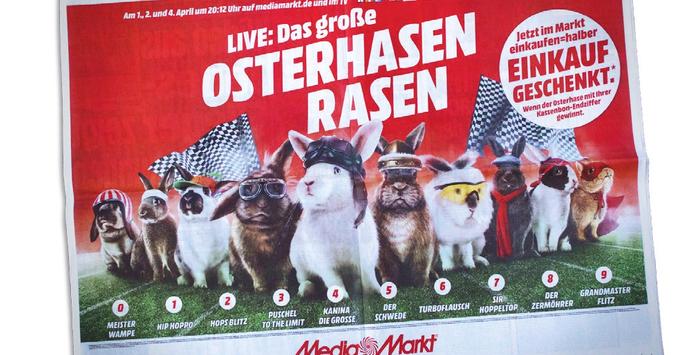 Since every other retailer was running a similar promotion, Media Markt needed to do something different.

The idea was to turn every Media Markt receipt issued over the Easter break into a betting slip. On the slip was the name of a rabbit. Over the weekend, on three separate evenings live on TV and on YouTube, Media Markt staged rabbit races. These were two-minute events with the results published on Media Markt's website as well as that of Germany's largest newspaper. To get 50% of your total spend returned, all that was required was for your rabbit to win.

Rather than everyone getting 5%, every tenth customer could get 50% of their money back. And have some fun at the same time.

In the build-up to the races, every rabbit was made a celebrity and much content was created for rabbit race fans to share.

250 million people reached. Facebook engagement was up 259% and traffic to the stores increased by 18%.

There was a time not so long ago when top creative teams, indeed top agencies, would shun promotional advertising. It was all cheap and nasty money-off coupons. Now the Promo awards at Cannes are among the highlights of the week with some of the brightest and best in the industry showing how this category can not just drive brand scores of all sorts but massively influence sales.

Ogilvy Frankfurt has been quiet for a year or so but with this returns to form as a creative hot-house, taking what could have been yet another dreary exercise in coupon distribution and turning iit into a national event.

Will these Easter bunnies give the agency a Lion or two? I predict they will.