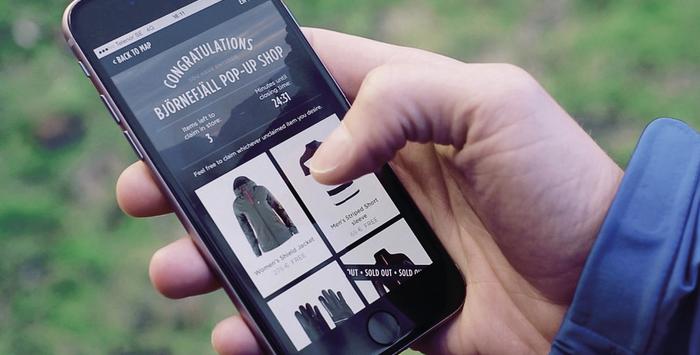 Peak Performance was a Swedish clothing company that had started in the 1980s with ski-wear but which had broadened out to become a brand that celebrated the great outdoors.

They wanted to spread awareness of their products and awareness that the brand really did know outdoors people inside out.

The insight was that people who loved outdoor pursuits also loved that sense of wonder they got at dawn or at sunset, when the clamour of the world receded and the experience was uplifting and magical.

To encourage their fans to see the world at these beautiful times of day, 14 virtual pop-up shops were created at some of the most spectacular locations in 11 different countries. On a mountain top, at the lighthouse of a small island...these virtual shops were only open during the magic hour of sunrise and sunset.

Now there was an added incentive for runners, walkers, cyclists and golfers to get out of bed early. Not just to discover for themselves the hand-picked locations but to claim for free an item from the Spring/Summer collection.

Once the GPS of their smartphones had detected they had arrived at the magic spot and provided it was still within the magic hour, then the pop-up shop was unlocked and a voucher made available to download.

All the adventurer had to do was take a selfie from the spot, which was posted up on Instagram.

For me, ‘storytelling’ was a meaningless buzzword used only by people who didn’t understand that brands communicate more in what they do and how they do it than in what they say. Then Illina Kuriashkina, a brilliant brand strategist at adidas, explained gently that storytelling is not in the idea itself but in its ability to inspire its users and fans to start telling their own stories about it.

So this genius idea has not only helped thousands of people recognise Peak Performance as a brand that genuinely understands them as people, but it has got them sharing photos on Instagram as the sun comes up and tweeting as it goes down, telling their stories.