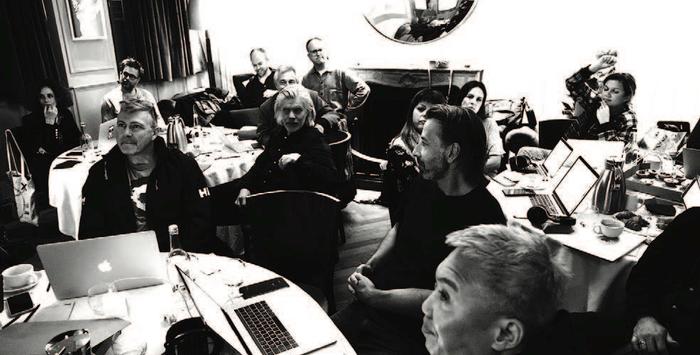 From May 7th to May 9th 2019, 22 jurors from around the world came together at the famous Groucho Club in London to judge the 41st annual Caples Awards.

Glen Dickson from Australia, Klaartje Galle from Belgium, Barb Williams from Canada, Tony Liu from China, Mario Bertieri from Colombia, Rana Khoury from Lebanon, Alfonso Marian and Susana Perez from Spain, Rene´ Eugster from Switzerland, Thijs de Boer from The Netherlands, Mark Fiddes from the UAE and Kay Cochran from the USA.

Today, any piece of marketing communications that elicits some sort of a response is eligible.

Under the leadership of Alfonso Marian, former Chief Creative Officer of Ogilvy New York and now Chairman of Ogilvy Spain, the jury was instructed to "set some standards for what outstandingly effective ideas look like. And let's have some fun!"

There was no shortage of high spirits at either The Caples party at The Marquis Cornwallis pub on Tuesday May 7th or the presentation dinner on Thursday 9th.
Before the presentation of the awards, Patrick Collister took the opportunity to remind the assembly of The Caples mission.

Run by creatives for creatives

Tonight's dinner is a little different to most awards shows junkets. It's smaller, it's by invitation and it's free.

When an awards show takes over a big hotel for a gala presentation, they usually try to make money by selling as many tickets and tables as possible. That means they need to offer a plethora of categories and insist that Gold, Silvers and Bronzes are awarded in each.

That way they can lure more agencies to the event.

By contrast, we want The Caples jury to be free to award as many or as few Golds as they want. The only thing that is important is that the work should be unquestionably good." By common consent, the standard of work submitted for judging was high. But it can be higher and the challenge for 2020 is not so much to attract more entries but to attract entries of the world's most innovative and interesting ideas. The ambition is that The Caples should be like the BAFTAs to The Oscars, a show in London that sends out signals about the likely winners in Cannes six weeks later.

In 2018, we opted to drop the 'Courageous Client' award and replace it with a category for Radical New Strategy.

Maybe we should re-think that.

Repeatedly, the jury found itself admiring the clients who had bought the top campaigns.

At one stage, Tanja Grubner, the Marketing Director of Essity, thought she would lose her job but was so enraged by the TV companies' refusal to run her advertising, she pressed on with the 90-second online film regardless.

Similarly, Velocity CMO Dean Chadwick put his neck on the line when he took his entire marketing budget for the year and spent it on his own points, in order to give them away.

And at HSBC, an unnamed marketer must have been bricking it in January when assorted politicians were tweeting unfavourably about "We Are Not An Island".

Normal people, by contrast, have responded warmly to the campaign.

A lot of clients are reluctant to spill the beans about campaign results, which is a pity. The Caples is positioning itself as a show that rewards work that works – in other words, campaigns with commercial purpose. It would be nice, then, to be able to have the numbers that prove the work worked. But in several instances, the jury were shown the results but then sworn to secrecy.

Suffice it to say, the Golds did all achieve their objectives – and then some.

Almost every juror has told us how much they enjoyed the experience of The Caples 2019.

Since 2018, the ambition has been to make The Caples a community of like-minded creative people.

Of course the awards are important. But so too are the relationships that form over the week. As one juror emailed us: "What was great was to see how other jurors were open to changing their minds. Often I've been in juries when I've just wanted to dig in my heels because someone is trying to promote their network rather than discuss honestly the work." Another said: What an intense three days but good food, good drink and good chat. It was great, the noise, the support, the friendships. Mark Fiddes wrote, "Now I get it. You have moved Caples to the nexus of media and creative change. It's not enough to have a great execution or a media innovation. You need both, whatever the size of budget. This is what makes The Caples different. All the other shows are siloed."
Barb Williams wrote to say, "It was a pleasure to join such a wonderful, warm, talented and smart group of people. You have created an award show and community that is very different from others. It's grass roots, it's real and it's super honest. I absolutely loved it. I've already booked meetings to share my experience, the cases and the importance of The Caples."

And, from Marcus Iles: "I can't tell you what an antidote The Caples is to the increasingly process and profit-driven industry we live in, to be surrounded by creative people who love and celebrate ideas."

The Caples Awards winners is available in a Powerpoint deck if you want to show and share this year's winners. Please email [email protected]