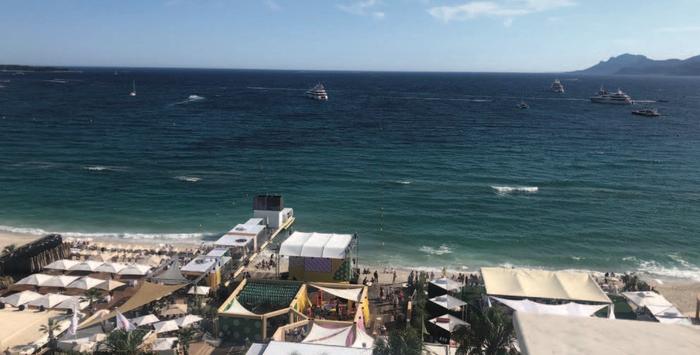 Can I admit that I was intimidated to head to France for the Cannes International Festival of Creativity? Despite the intense planning and prepping by Kristal Herr and Team Newell at WPP, I wasn't quite sure how I would react when mingling with the heads of all our agencies and media partners.

Everyone I met seemed to be an SVP or a CCO or a CMO. But the cool part – no one cared. Badges were first name only and conversations were casual – excitement about the work and speakers we were seeing, ideas on how it could apply to our brands. There I was chatting to someone about one of the talks we'd attended and sharing a laugh about it and she turned out to be the CMO of Kimberly Clark. We talked about people we knew and talked about potential partnerships.

People are a lot more relaxed when they're in tee-shirt and shorts.

For me, it was a great opportunity to talk to our agency partners about some of the challenges we're facing at the moment. Not in a formal way but with a series of natural conversations that have followed us home.

What I thought was, how great it would be to get more Newell marketers to Cannes to be inspired, make connections and hopefully win some awards? Maybe as a reward for bold new thinking? Maybe to inspire those among us who have the biggest problems to deal with?

In the meantime, I brought back three observations or learnings.

One, knowing what you're not

I got the opportunity to hear the founder of Spotify talk about their business, which is still growing at a rate of 30% a year and hosted epic concerts each night at Cannes (or so I heard).

In the Q&A session, someone asked 'When is there going to be a Spotify device out in the market?'

The answer was, never. "We are not a hardware company."

Then someone asked what they were going to be doing in video and 5G. Again, the answer was, nothing.

"We are an audio company."

That makes total sense. When you are crystal clear about what differentiates you then you can be equally clear how to grow your business. Audio gives opportunities no other media can match. In your car, when you're mowing the lawn.

My big take-out was that our brands need a more distinctive point of view. And that leads me on to:

I got to listen to Mark Pritchard, the CMO of Procter and Gamble. His POV was that share gain is a vicious, competitive game where only one [company] wins. Growing markets and improving prosperity, benefits all. He's so busy working out how brands can do good in the world, I imagine he must have a CMO back in Cincinnati doing all the actual marketing work.

Goodness is something we can all go for.

I'm beginning to think about a passion project that brings some of our great products (Contigo, Ball, Rubbermaid Food Storage) together around sustainability.

Spending time with our WPP team was important in helping develop the new partnership.

But beyond that, there were some fascinating new brand tie-ups.

I loved the 'Keeping Fortnite Fresh' campaign from VMLY&R for Wendy's.

I got to hear the behind-the-scenes story from the CMO of Wendy's and their agency partner, VMLY&R.

How the creative people were playing computer games in the office when they learned that Fortnite was about to stage a Burgers vs Pizza face-off in the game. So cliché.

In our creative training we have talked about how a good brief can buy the creatives' shower time. Or their Uber-time, when they are not in the office but are still thinking about work. Wendy's had their gaming time – not even on a brief, but just living life with their client in their subconscious.

How do we evolve our agency partnership to get their creatives' game time? That's what I found myself thinking.

The Fortnite idea took a day and a half from inception to approval.

I'd love it if Newell could become that agile.

On the subject of partnerships, John Legend spoke about how brands need to respect influencers because what they are really investing in is authenticity.

And then he sang for me.

Oh, okay, me and a couple of hundred others.

Cannes was definitely worth the long flight and the jet-lag.

I spent less time in the festival hall basements looking at work than I would have liked. Jamie Schwab, VP eMarketing at Newell and my partner in crime for the week, said wisely, "I'd rather spend the time meeting people in the sun and I'll look at the work when we get back home."

$10 says he hasn't - the day job tends to get in the way of inspiration time. Cannes was good because it forced that into our calendars.

There were more meetings than I had anticipated. Nevertheless, I came home inspired and determined to apply as many of the learnings as I possibly can.

Agency creatives noticed that Fortnite were about to introduce a new extension into the battle-game called 'Food Fight', Team Burger versus Team Pizza.

The creative idea was to introduce a Wendy's character to play the game but rather than destroy other players, she would destroy the freezers in which the burgers were stored.

Behind this was a good, old-fashioned advertising promise. Wendy's don't freeze their meat.

Soon other players joined in the fun and began blitzing freezers as well.

Abuse of senior citizens was on the rise in New Zealand. The problem was, older people didn't know they could get help and even if they did, they didn't want to alert their abusers, often family members, to what they were doing.

Because older people almost universally enjoy doing the crosswords, that's where they were targeted. Special clues in crossword puzzles defined a type of abuse.

All clues led to the same answer: abuse. And a phone number.

Calls to the helpline increased 271%.