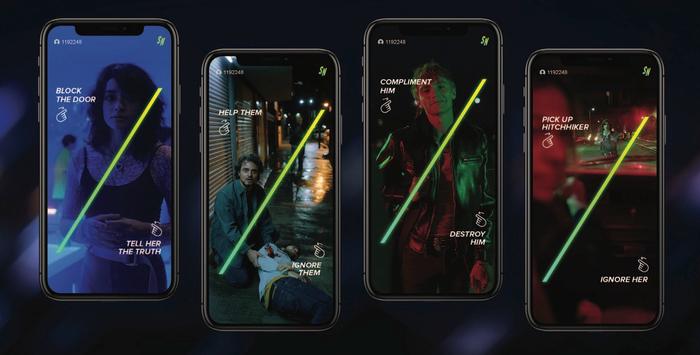 Tinder had revolutionised dating culture with its brilliant Swipe™ feature. But, over time, the experience had become passive and mindless.

The challenge was to find a new way to breathe energy and cultural relevance into the brand while providing Gen Z singles with a more meaningful way to match.

While considering how best to connect with their audience, Tinder realised their own platform was the most powerful media channel. With more than 340 million downloads since launch, and more than 43 billion total matches, Tinder had a built-in audience already actively engaged with the platform.

Swipe Night was a first-of-its-kind interactive series inside the app.

On Sunday nights between 6pm and midnight, Tinder users became the stars of a scripted mini-series about the end of the world.

Rather than swipe left or right when they viewed other people, users swiped to make choices. The choices both moved the story on and revealed the personality of the swiper so he or she could be matched up with people who had made similar decisions - to save the puppy rather than the person, to help the injured person or to walk on by. When Tinder now matched people with each other, they had something to talk about.

By inviting members to match through Hollywood-standard entertainment, Tinder gave people a reason to come back and see the story unfold every Sunday.

To make the series as relevant to Gen Z as possible, Swipe Night episodes were written and directed by well-known Gen Z creatives.

In the cluttered Sunday night space, Swipe Night’s first season had more views and more viewers than the entire 2018/2019 seasons of some of American TV’s most popular shows. Online, the series earned four billion impressions and saw a 1,600% spike in Twitter activity. Member engagement showed a 26 percent increase in matches over a typical Sunday night with a 12 percent increase in messages.

This has led Tinder to plan taking the Swipe Night series to other markets in 2020.

I’ve assembled some random stats picked off the internet.

Branded content gets an average 86% recall as against 65% for a TV ad.

It can be 22 times more engaging than traditional advertising and customers loyal to a brand will spend twice as long engaged with it.

Stories are 22% more effective than facts.

61% of millennials are more likely to engage with branded content.

But only when it’s genuinely interesting and entertaining. This is a masterclass in how to do it properly. By innovating within their own platform, Tinder has created a unique form of interactive storytelling. What makes it so compelling as an idea is that there is a personalised outcome to every episode.