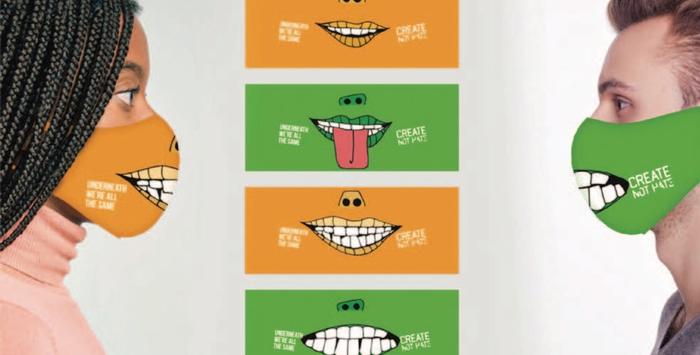 Create Not Hate is a programme designed to open the eyes of young people of colour to creative careers and those of the creative industry to this same group’s creative potential.

Two black youths, who appear to be having a heated argument, are observed through a café window. A white couple standing outside are watching but cannot hear, so misjudge the exchange, which is not a drug deal gone wrong as they speculate but an impassioned rehearsal by two young actors of a scene from Romeo and Juliet.

One of two shorts titled ‘Check Your Prejudice’, the film recently aired on Channel 4 in the UK and has achieved over 90,000 views on social media. Not bad going for the London school kid whose idea it was, a 17-year-old called Emmanuel. And a powerful demonstration of the latent creativity there is among young people of colour, a vibrant talent pool that, as far as the ad industry goes, lies untapped. Which is the focus for Create Not Hate, first an initiative, now a non-profit Community Interest Company that has brought ‘Check Your Prejudice’ and a portfolio of other powerful ideas to life in the UK since late summer with more due to break in coming months.

I first had the idea for Create Not Hate back in 2007, when it ran as a one-off to open the eyes of black inner-city school kids to their creative potential.

I was an inner-city kid

As I was once an inner-city school kid myself, growing up in Clapham, South London, I wanted to show them their lives could have meaning beyond gang membership and violence. And as founder of my own agency, Quiet Storm, and having been lucky enough to enjoy a long and exciting career, I wanted to show the ad industry that tapping into the talent pool of a more diverse array of young people could both strengthen advertising creativity and deliver social change.

So I encouraged experts from the world of advertising to join me in coaching over one hundred participating kids from across London. We produced a short film focusing on gun crime’s living victims written by two 14-year-olds called ‘A Mother’s Tear’. And the initiative generated nearly two million pounds in earned media.

Though a powerful idea, Create Not Hate was not sustainable, however.

Back then, it was me who footed the bill and to be honest, I couldn’t afford to do it again completely alone. Which was why earlier this year, just after George Floyd was murdered, when we came up with the idea to relaunch Create Not Hate as a positive way to both give something back and deal with our anger, it was clear we had to do things differently.

So this time, we got leaders from some of London’s leading agencies on board, including Vicki Maguire, CCO of Havas London; Matt Davis, co-owner of The Red Brick Road; Paul Jordan, Creative Director at Engine and Jo Wallace, Creative Director at Wunderman Thompson, who worked on the original Create Not Hate campaign while she was at Quiet Storm, and is back on board as a mentor in 2020.

We signed up agency-level partners, including Ridley Scott Creative Group, spearheaded by Global CEO Luke Scott and MD Kai Hsiung; Engine Group; The Mill and Lively Agency, thanks to Founder & CEO Mike White. And we received media support from, among others, Metro, Time Out, the Daily Mail, Spotify, as well as prime poster sites along the route of the Notting Hill Carnival by Jack Arts, and Clear Channel and Posterscope for the Westway Tower, all secured for free thanks to Total Media.

Focused on the Notting Hill Carnival

We partnered with Debate Mate, which has an established network of young people through its school debate programme and experience in youth mentoring schemes, to provide communication training and peer-to-peer mentorship. And we secured the involvement of School of Communication Arts creative team Marley Muirhead and Chris Medford to devise the concept and to help brief our first project: an anti-racist campaign focused on the Notting Hill Carnival, which was cancelled this year because of the coronavirus pandemic.

Which is how in summer 2020, during lockdown, we ran four sessions with kids and creatives to talk about the possibilities of the industry and what they could achieve, and to nurture their ideas. During the first one, which took about half a day, we kicked around ideas and discussed their experiences. Some were powerful, some were humorous and we didn’t want to tie down specifics too early such as which media, by saying, for instance, ‘You must do a poster’.

I shared some things I’d seen in my life as well as some of the work I’d done in the past. Other sessions revolved more around tying down ideas. Later, we did sessions to give them hands-on experiences of the production process, such as editing. There was also a session on graphic design and young creatives shared how to bring posters and T-shirts to life. We showed how an idea can be transformed and demonstrated that what we were saying we would do with their ideas was legitimate. That broke down some of their cynicism as well as allowing them to have insight into the many different career paths in the industry.

The only white person in the room

We went to youth centres around Merton, the kind of places where I grew up and I could see some creative directors were clearly not used to being the only white people in a room. Afterwards, the creatives were beaming; the honesty of the conversations left some in tears. Some of the young people were quite cynical about us at first. But then, as we watched, we could see the room transform. One young kid said to me at the beginning: ‘I don’t ever want to work in advertising!’ Then at the end he didn’t want to leave. It was very rewarding and so satisfying to see their work coming to life.

The first work from Create Not Hate was launched in late August to coincide with when the Notting Hill Carnival should have taken place. More work was then launched in October tocoincide with Black History Month. And the quality and range of ideas and executions is great.

The brief the kids were set was emotionally charged: how would you tackle racism through advertising? Everything was to be based on what it’s like to be a black kid, drawing from their personal experiences. How they should be treated by police in order to avoid creating drama, hostility or problems, for example. It was both powerful and simplistic. And it was a subject matter that immediately resonated with them. These kids are well aware of racist issues. One was even stopped on the way to one of our sessions. He was with his mother, and she showed us the handcuff marks made by police as, ironically, they stood in front of a Black Lives Matter poster on their way to see us.

The absurdity of racism

We produced posters, T-shirts, films and TV, choosing ideas for their simplicity and for the level of challenge to their audience. For example, one set of posters featured racist dogs to show the absurdity of racism. This was brought to life with Ridley Scott Creative Group. Another idea, revolving around making racism extinct, depicted dinosaurs with racist attitudes and this was realised in animation and print by Red Brick Road along with creative production partner, The Mill. (See the campaigns on page 58-59)

The work gets you in the guts because it’s very truthful.

Moving forward, we want to do another programme in early 2021. And we want to launch more work in the first quarter after Christmas if we can get funding, which we’re hoping we will. The work has had an incredible response on social media, with even celebrities in the US sharing it, and we’ve achieved a media reach of nearly 400 million thanks to the work of our PR Partner, Persuasion.

Create Not Hate is about giving an opportunity to see what diverse talent can deliver. Racism still exists and must be tackled to drive positive change. Thankfully, society is now more open to talking about it. But it’s also important to challenge unconscious bias. So that means encouraging the growing realisation amongst people that it’s not OK to only hire those who were educated at the same places they were, or who speak in the same way, even though deep down they are not out and out racist.

I’ve had a long and rewarding career and I want others to have this same opportunity.

I’d love to see an influx to the industry of people from different types of background to the middle-classes who predominate. Create Not Hate’s broad aim is to tackle social issues and to boost diversity in the advertising industry. If we are to achieve positive change, now is the time.

Trevor Robinson was a star creative in the 1990s when he was one of the team at HHCL behind the (genuinely!) iconic Tango “Slaphead” commercial. In 1995 he set up Quiet Storm, the UK’s first creative agency to be a production company as well. In 2007 he founded Create Not Hate and funded “A Mother’s Tear” himself, a short film about gun crime written by two 15-year-old boys from South London.

In 2009 he was awarded the OBE, an award made by the Queen for people who have contributed to public life. Some would say he deserves a knighthood.

To donate to the Create Not Hate programme, please go to createnothate.or or to gofundme.com.