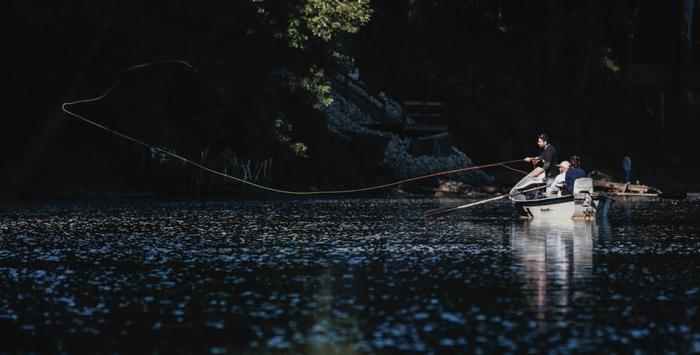 What fly fishing taught me about advertising

By Mitch Duesling Co-host of the So Fly Fishing Podcast and Associate Creative Director at The Hive in Toronto.

It was the early '90s. Flocks of wide-eyed movie-goers left theatres across North America inspired by a sexy Brad Pitt standing in a river wearing over-sized rubber pants. What a time to be alive. Robert Redford's "A River Runs Through It" is a fantastic film, no doubt. Mark Kingwell, author, philosopher and angler perfectly summed up the impact it had on the fly-fishing world by referring to it simply as, "The Film" – a holy, respected piece that truly captured what it means to be a fly angler.

While that movie swept the nation, fly shop after fly shop opened in its wake. More people than ever picked up a fly rod and hit the river only to tangle themselves in line while flailing about in attempt to trick a trout. Those same people, one year later, packed their rods into a nook of their garage, never to flail them again. But many carried on and continued to learn the intricacies of the sport. They were, as they say, "hooked".

I am one of those people. Though I wasn't initially inspired by "A River Runs Through It", I was inspired by my uncle, Joe Amaral. I first picked up a fly-fishing rod when I was 13 years old, inspired by photos of Joe with giant brown trout, bass, or coveted Atlantic salmon. I was absolutely moved by what he was doing, chasing after fish, understanding their environment, the way they act, the creatures they eat. There was so much to it.

Around the same time, Joe was creating great campaigns and commercials with TBWA in Toronto. When he visited my family, I'd get a chance to see the work. Work that inspired me to also pursue a life in advertising.

These two parts of my life have influenced each other tremendously. Though for years I didn't think much of the parallels, they've become more apparent as I try, like a salmon, to swim against the current in an ever-changing and difficult-to-navigate industry. Here are a few of the things fly fishing has taught me about advertising.

A fly (lure) with flash might seem appealing. Stick a bunch of sparkly material onto the fly and the fish is more likely to see it, and want to eat, right? Nope. More flash does not mean more fish. In fact, subtlety goes a long way in convincing a fish what you're offering is real. It's authentic. It's an ACTUAL insect, minnow or creature that would make a lovely meal.

With the advent of 3-second attention spans and social environments that are more distracting than inviting, clients and creatives often lean on flash to grab eyeballs. Flashy camera moves, over-the-top transitions, a million things going on at the same time – it does not replace authenticity. Your work must be honest and real. You cannot layer on flash and cross your fingers. Consumers are smarter than that, despite what your data says. People don't give a fuck about your message becAUSE YOU'RE YELLING IT AT THEM! They want value added to their interaction. Give them something valuable and then set the hook. A little flash can be fine, but it isn't everything.

PAY ATTENTION TO YOUR SURROUNDINGS

This might seem obvious, but sometimes I find it's so easy to forget. Some days on the water I feel like a horse with blinders. I've fished this lake a hundred times. I know where to go, and how to catch a fish. Put a streamer fly on and make some casts. Slow retrieve and the fish will bite. Why the hell aren't they biting? What am I doing wrong? A month ago, this produced twenty-five fish. I stop and look around only to realise the water has dropped a foot. Things aren't where they were before. I can't do the same thing and expect the same result. Move out a little deeper and make the cast. Boom, a fish takes the fly. And it all came from stopping and looking around. Checking in on what was new, different, or happening that moment produced a better result. It gave me a new idea and things paid off.

I find it more and more imperative to pay attention to the world around me, and how things are changing in the industry. Snapchat has a new offering every fifteen seconds, or so it seems. What just happened in the news? Look at this, baby Yoda. We're in the business of communication and connecting with people based off current interests and trends. How can we create when we're not plugged in? New ideas come from looking around, getting outside your bubble, and opening yourself up to fresh thinking. Bryan Hobson, a fantastic copywriter and mentor once told me, "There's a reason so many commercials take place in an office." He told me to go walk around, brainstorm some place different, look at people. Just stop trying to GO and pause. This became a huge part of how I think and create.

It's rainy, cold and windy. Ugh. What a terrible day to be on the water. Who wants that? I could be at home wrapped in my electric blanket, with an Oculus GO strapped to my face watching VR YouTube and eating cheese puffs. That sounds pretty nice. Instead I often enjoy hitting the river. I do this because no one else will, and I'll have alllllllllllllllllllllllllllllllllll the water and fish to myself. That's a special thing as across North America we find popular fishing spots become more and more crowded. When you fish the bad weather days, you often do much better. You often catch more fish, and leave feeling tough and rugged, like an actual fisherman, and not this cheese puff VR blanket boy.

While the industry spins around blind-folded trying to pin the idea to the brief, concerning themselves with data-driven ideation and acronyms for things that don't fucking matter, fish the rainy weather. Come up with idea driven campaigns that cut through the bullshit and make your brand famous. When everyone else is laying low due to bad weather, think, and act. Find the trends people aren't going after. Latch onto a topic less trodden. Your work will stand out that much more.

Fishing alone is amazing. But fishing with friends is amazing-er sometimes. I've spent many hours on the water alone, and it allows you to sit, think, reflect, and fart unapologetically. But fishing with buddies over the years, be it Dave, Drew, Gab, Yilma, Aldo, Chloe, it has added a layer of fun and success. If the fishing is slow, we come together and think of ways to find a fish. We don't care who catches it, we just want one brought to the net and sent back on its way. "What am I doing wrong?" or "What are you using?" are common questions asked when fishing with a buddy. And the response leads to resolution.

You can think of ideas alone. You can get work done solo. But you'll get further working in a team, sharing your ideas with others, or asking for help with a roadblock. Working with others simply leads to a better product. It's easy to hold your work closely, and sometimes ignore collaboration. It's not always a bad thing. But find a trusted friend and get their perspective.

The red tape and sometimes seemingly impenetrable processes can get in the way of tons of hard work. Late nights, passionate presentations, changing budgets, lost pitches, people that just don't get the idea you KNOW will work. You put your heart into what you do, and don't always feel the love back. It's a tough business and can be stressful to constantly be better with more limitation. But stick to it, because the hard work pays off. You'll make the catch if you just stay out a litttttttle longer. It's always the case.

It's very true, these two parts of my life impact each other greatly. It's rewarding, being able to apply skills I've learned from fly fishing to my professional life as a copywriter and creative director. And it works both ways as I've recently used my advertising knowledge to build a fly fishing podcast brand called So Fly. Together with my partners and fishing buddies Yilma and Aldo, So Fly has garnered over 60,000 downloads, and 41,000 video views. We've travelled the world creating content for fishing lodges and guides. We've partnered with brands to help tell their stories through sponsored content along the way. We've met production partners who have helped pull content together on limited budgets, all in the name of making something special.

I suppose when you allow different passions in your life to influence each another, you're more likely to find new opportunities. Then it's all about how you'll swim. Hopefully, like a salmon.