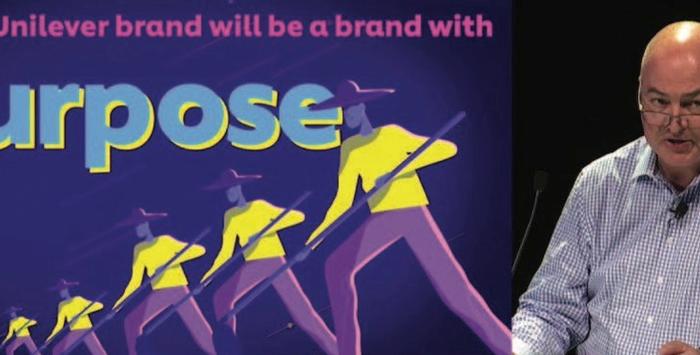 What’s the point of agencies?

This is the text of a speech Steve made to the new students at The School of Communication Arts in London on October 27th 2020. The entire debate can be viewed at: http://www.youtube.com/watch?v=JQwzx4qALmI

What’s the point of agencies? I’m going to address my answer to the students who have just started this year at the School of Communication Arts.

What is the point of you being here?

The answer to that will I think also be applicable to “What’s the point of anyone working in an agency.”

I think Marc Lewis, your Dean of Studies, will tell you that your primary objective is to develop the skills that will enable you to build brands and sell products and services.

When you leave the School, that is certainly what your clients will be paying you to do.

And what you’ll be doing is a fantastic thing.

Because every time someone buys something that you’ve advertised, you’re enabling someone else to get paid.

And not, for example, just the person in the shop where the purchase was made.

When you create demand for a product or service and it gets bought, you are helping all these people - their families and their loved ones, too.

In the course of your advertising career, you will touch the lives of thousands, maybe millions, of people.

This is your commercial purpose and this is what you are learning about at the SCA.

Now you have probably heard from other sources that our business today is about selling Social Purpose - that your work must be solving society's problems.

And, in some cases, this is possible.

When the social purpose of a brand is aligned with the product, the positioning, the proposition and the people you are selling to, purpose-driven strategies can work.

There are many examples. SCA student Shepherd Chidenga wrote to tell me his favourite example of this is Nike. And that’s great.

All brand building is about differentiation and if you can credibly differentiate because of practices that add value to society, fine.

But the brands that do that are outnumbered many times over by those that are grabbing at the fig leaf of virtue as cover for their commercial operations.

For example, selling Dairy Milk Chocolate has absolutely bugger all to do with solving the crisis of loneliness amongst the aged.

In September 2019, Cadbury announced to great fanfare that they were going to work with Age UK to do just that. The campaign ran until March 2020, when it just so happened that Covid-19 struck and the UK’s elderly were locked away from April to July in their own cruel solitary confinement.

Likewise, Kit Kat has bugger all to do with solving mental health problems.

Sprite has bugger all to do with stopping online bullying.

And Sunny Delight has bugger all to do with providing advice to the suicidal.

And I'd suggest this “bugger all” applies to the majority of those brands that have jumped on the Social Purpose bandwagon.

Unilever’s CEO Alan Jope called it “Woke Wash”. It’s a gimmick. And most brands will dump that gimmick when the next fad comes along.

The truth is, to use Unilever’s own rule of thumb, Social Purpose is appropriate to maybe 8% of the briefs that you will be given during your time at the SCA and I imagine your Dean will be very disappointed in you if your portfolios don’t reflect this.

Why? Because Social Purpose will not be an appropriate or credible proposition for those brands.

Also, because, whilst sympathetic to social causes and issues, the mainstream audience, the people you’ll be aiming your messages at, will be much more interested in what the product or service will do for them. It is their immediate self-interest that motivates them to buy.

Evolutionary psychologists will tell you this. But so will any creative worth their salt.

However, if you want them, here are some facts:

Last summer, Andrew Tenzer and Ian Murray of Reach Solutions researched both the mainstream and the advertising community.

Both samples were asked what was important to them when making a purchase - and they were given a list of factors to choose from.

“The inconvenient truth for social virtue advocates is that even at the height of the Covid-19 crisis, it’s good old-fashioned attributes like value for money, reliability, product and service and customer service that are top priorities for the mainstream and for advertisers, too.

“We have identified a clear disconnect between one of the dominant narratives in our industry and practitioners' beliefs about what actually works. The simple fact is that even people in the industry don’t believe social virtue matters to mainstream audiences.”

Why do we do this? Why do we still try to foist Social Purpose upon a mainstream that doesn’t want it?

Because, as Tenzer and Murray have discovered in their three award-winning studies of our industry: “We find the same basic pattern being reinforced time and time again. Advertisers and marketers diverge from the mainstream on every major psychological, behavioural and attitudinal framework that we have explored. They inhabit two different worlds.”

You students need to be warned, because when you graduate from here, you’ll be entering adland’s weirdly different world.

In fact, you’ll be joining a wealthy, middle class elite that has little in common with ordinary people.

88% of the people you’ll be working with have a degree or Masters, compared to 26% of the rest of the population.

70% of adlanders grew up in household where the chief breadwinner was in the richest A/B social class, compared to the UK average of 29%

But the 13% who come from a BAME background are even more middle class than their white counterparts. Fully 69% were privately educated - compared to UK average of 7%

So, if you’re working class, white or BAME, or you didn’t go to “uni”, you’ll struggle to fit in.

And you’ll have to conform. Indeed, you’ll be made to conform to the industry groupthink

D&AD will indoctrinate you

Which brings us to adland’s politics. People in advertising are twice as likely to be left-wing than the modern mainstream.

And they’ll be happy to impose their worldview - and their politics - upon you.

Tim uses the tag: “Chairman of D&AD”. And the people who follow him do so for news of what’s happening at D&AD, described by Wikipedia as a British educational organisation that promotes excellence in design and advertising.

But he uses Twitter to carpet bomb his followers with his left-wing political views. And, if you check out his tweets, some are offensively extreme.

In all, his political tweets outnumber those related to D&AD by 5:1.

I hate to say this but the D&AD organization itself will also try to influence you.

The new President of D&AD is a chap called Naresh Ramchandani.

Upon his arrival he has made it clear that: "Brands do have to be politically minded.”

But the politics he encourages are not of the moderate centre. It is his left-wing politics that he will be promoting.

He’s also made it clear that “Purpose-led work is going to be the next generation of creatives’ most powerful tool.”

And he has said that it is his overriding “mission to raise standards within the industry with a focus on sustainability, diversity and the next generation of creatives.”

He’s going to raise standards amongst you, the next generation of creatives, which is good.

But, his focus will be on sustainability and diversity.

In other words, and let’s be clear about this, he’s telling you that if your work isn’t aligned with the social purposes that he approves of, you won’t be getting a Pencil.

D&AD is there to raise standards and encourage and nurture creativity.

Yet by forcing this groupthink upon the industry, Ramchandani is imposing a suffocating formulaic orthodoxy on you. The exact opposite, in fact, of what a President of D&AD should be doing.

Young creatives aren’t dumb. You know that if you want to get on you must play by the rules being imposed upon you.

Look at “Cream 2020”, Campaign magazine’s annual competition to discover the next breakthrough talent.

Of the 20 winning entries, only three were designed to persuade a prospect to actually buy something. Only those three had a commercial purpose. In the other 17, there was no sales objective whatsoever. Again they were about social problems.

You’ve got to fight this groupthink

You’re the future of the industry and you’ve got to resist the elites who want to impose their worldview, and their groupthink, upon you.

You’ve got to keep in touch with the people out in the real world.

Understand what makes them tick. What is keeping them awake at night. What they want from life and from the brands, products and services that you are trying to promote.

If you do this you can help them in their lives. But just as importantly, as I said, every time you do an ad that leads to someone buying the product you’re selling, someone else gets paid.

And making that happen, creating demand and making people are getting paid, has never been as important as it is right now.

234,000 small businesses have already closed because of the Coronavirus.

Some 2.7 million claimed unemployment benefits last month, an increase of 1.5 million since March.

And it is estimated that we’ll have 4 million unemployed before the crisis is over.

These people need the economy to climb up off its knees. Which indirectly means they are dependent upon the skills that you are learning here at the SCA.

Social Purpose is fine, for the limited number of briefs for which it is appropriate.

But if you want all your work to be a force for good and if, in these brutal times, you want to save businesses from going under and rescue families from the misery of unemployment, make sure every piece of work you do achieves its commercial purpose.

Steve Harrison is the former founder of HTP Brand response and Chief Creative Officer of Harrison Troughton Wunderman. He is described on on LinkedIn as ‘writer, teacher, adviser’. As a writer he is responsible for five books, including a biography of Californian adman Howard Gossage, “Changing the World is the Only Fit Occupation for a Grown Man”.