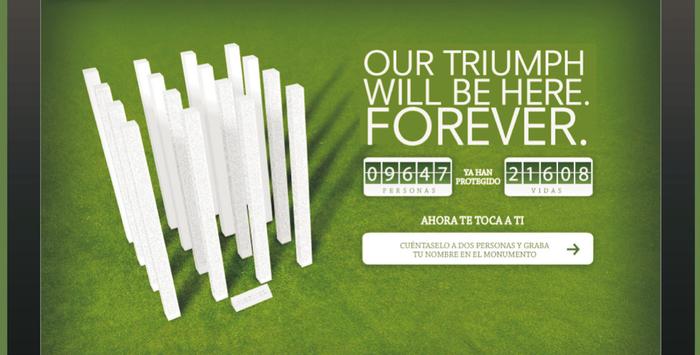 Here we are, Issue 10 and the start of what I expect to be a fantastic year for creativity in all direct categories. Why so?

Because in a recession, marketers still have the same sales targets. What they don’t have are the same budgets. It means they are more open to new ideas. So it’s up to agencies to make sure that at every presentation there’s a ‘Here’s what you’d expect’ route to reassure, and ‘Here’s what you wouldn’t’ to excite.

As and when you do the exciting stuff, please don’t forget to send it to us ([email protected]).

Now, there's nothing like starting a new year than with a look back at the old year. So here's a quick look at The Won Report 2008. The Won Report is an analysis of the world's best DM, as measured by the quality and quantity of awards won.

We log into a database of all the awards shows and then add up the results at the end of the year.

The lists that emerge are both interesting and irritating because, as Disraeli noted, 'there are lies, damned lies and statistics'. Some of the most interesting work doesn't get a look-in, usually because the agency didn't enter it into enough shows.

Some of the bloggings that were posted after the 2008 reports were launched show the ambivalence of many people to the whole business of rankings.

Here's Anonymous at 10.16 on 18 December in the 'Comments' box of Australia's online ad mag, 'Campaign Brief':

I wonder how Australia ranks in the 'infomercial' and 'telemarketing script' categories according to all the leading award shows.

Come on - let's be honest - being ranked #3 in 'shit that folds' is more a testament to which country's DM agencies have frustrated ad creatives who are aware of and even enter the ad award shows... Most DM people globally don't read ad blogs and compare how creative their department store sale pamphlets are in award shows...

I wonder if Australia has the best designed parking tickets, globally..

10:16, you obviously have no idea what DM is. Probably best to get back to your long lunch and enjoy it while it lasts.

And also for the record, a piece of shit that folded made a certain bank over half a billion dollars within 2 months in a period of uncertainty and decline.

So my thoughts are, fuck off art wanker, where's your results and are they measurable?

Most garlanded campaign of the year is 'Monument', from Shackleton, Madrid. At the heart of the idea is a two-metre high sculpture in a Madrid park comprising 16 columns, each inscribed with the names of those public-minded citizens who forwarded the message that there is now an inoculation against cervical cancer.

Try folding one of those.

Or the No.2 campaign, 'Welcome Snoop'. In Australia, young viewers were abandoning MTV, so agencies Lowe and Rivet, working in harmony, used TV, online video and a website, supported by some outdoor and press ads, to get Australians to pressure their Government into allowing Californian rapper Snoop Dogg to become an Australian citizen.

No folds, but positive results for MTV in terms of increased subscriptions.

No. 3 – 'Cover' for IKEA from German agency Jung von Matt. The idea was to replicate the set they built for the cover photograph of the 2008 catalogue and take it around shopping centres. Passers-by could sit on the sofa and have their pictures taken. A few days later, at their IKEA store, they could pick up their own personalized catalogue with them on the cover.

Even where Direct Mail was the media of choice, not everything folded into an envelope.

Shackleton's 'iJam', for instance. The agency figured that what their key clients wanted for Christmas was either a traditional ham or a really modern bit of Apple kit. So they gave them both. They mailed out an entire pig’s leg, boxed as if it had been designed by Jonathan Ives and signed off by Steve Jobs.

It's true that Proximity London came in at No. 19 with a good old-fashioned letter. But it was a letter made of chocolate (which we featured in Directory Issue 6).

And Goss sent out a pretty ordinary Christmas card (also featured in Issue 6). But addressed to 'The homeless guy, In the subway, Near the city centre'. By scrawling the intended recipient's address on the back of the envelope, the card was returned to sender.

What we see in The Won Report this year is not just more video than ever but more integration between online and offline as well.

Take the No. 7 campaign, JWT Costa Rica's brilliant 'Do It In A Car That's Not Yours' work for Nelka (in Directory Issue 8). It started with a website, then went out into press, posters and TV and, yes, there was mail in the mix too, but the idea is one any creative person worth their salt would have been proud of.

The same with Schlammers Quest out of DDB Berlin for VW. And JWT London's campaign for 'Anti Slavery' on behalf of MTV.

Blackwood’s 'Gingerbread Haka' was a viral that went global.

And Mortierbrigade's mould-breaking idea for Studio Brussels got a small black boy to invade prime-time TV shows, moving advertising away from the breaks and into the content.

These are all campaigns that haven't just been winning awards for DM but in Innovative Media, Media, Sales Promotion, Online Advertising and Integrated categories as well.

BMF's campaign for Toohey's Extra Dry, which provided the front cover for Directory Issue 9, could even win awards for Packaging.

10:16, if you should ever get to read this, get in touch. We’ll send you a DVD of the year's best work. You'll see for yourself that Direct is changing. It's changing because clients are no longer happy talking about spend. They want to talk about investment. They want to know what predictable, measurable returns they can expect.

It sharpens the mind, when you have to guarantee a minimum ROI. And while there is always going to be dross, the quality of DM which is submitted to us here and which then goes on to get listed in The Won Report is almost always of the highest order.

In 2008, where there was stuff that folds, it certainly hasn’t been shit.