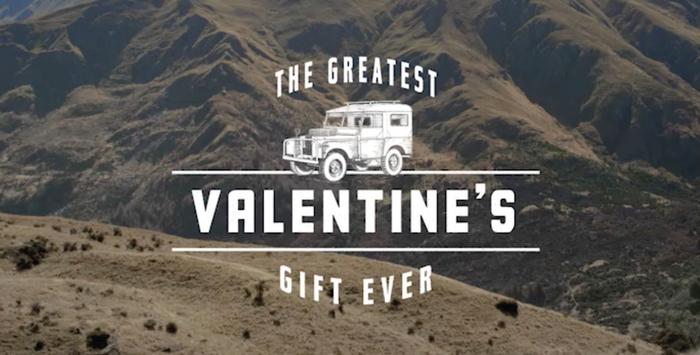 15 years ago, four Kiwi students pooled their student loans to purchase a 1957 Series 1 Land Rover. It was their pride and joy and the source of many adventures. However, over time, she fell into disrepair. Desk jobs, weddings, children and mortgages took priority over restoration attempts. Reluctantly, the lads listed the vehicle on New Zealand's largest online auction site, accompanied by a heartfelt 'Dear John' letter saying goodbye.

Land Rover caught wind of the listing and felt compelled to act. They bought the vehicle and had her restored to near-new condition.

Some of the dents she had acquired were kept and the original bumper stickers were recreated. Once completed, she was test-driven in New Zealand's South Island, where the lads had spent most of their time with her. The team put her through her paces, and recreated the photos from the original online auction.

Soon it was time to reunite her with her oblivious owners. With the help of Claire, wife of one of the owners, the lads were all invited over for the evening of February 13th on some spurious pretext. The lounge was fitted out with hidden cameras as was the Land Rover, before being tucked away in the garage.

That evening, when they were all watching TV, a commercial announcing the return of their beloved Land Rover was aired nationwide.

Not surprisingly, they were shocked, confused and ecstatic in equal measure. The reunion was covered by New Zealand's foremost current affairs show and aired as part of a Valentine's Day special. A three-minute online film detailing the entire project also went live that night. Because no gift was complete without a card, the following day, Valentine's Day, Land Rover took out a full page in the New Zealand Herald, a message for four that was seen by hundreds of thousands.

What an intriguing example of communication this is. Not only does it tap into the thoroughly contemporary fixation with bromance, but it uses the brand’s heritage very cleverly to imply something about its values today.

And they are all about adventure. Just as those four guys had great times in their old Landy back then, so you can have brilliant times in your new Land Rover today.

Because it isn’t a car you’ve got there on your drive. It’s a mate. To be cherished, to live life with, to be loved.

Nostalgia is central to the idea. Not just nostalgia for those carefree days of our youth but for the Land Rover Defender itself, which, after 65 years of production is set to be discontinued.

A lovely ‘glocal’ idea, as relevant around the world as it would have been at home.