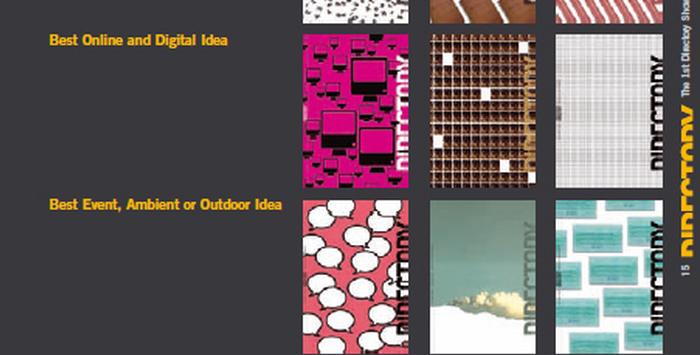 Directory has been going for four years now and has amassed an archive of well over 600 of the world’s most interesting and most innovative direct campaigns.

Most of the work we showcase has gone on to win awards at various local and international shows, prompting the question, if these are the world’s best direct campaigns, then which among them are the best of the best?

The idea for the Directory Awards was first proposed by the legendary Steve Harrison and the plan is to make them a biennial event. It would be fun to have some sort of a ceremony but with winners coming from Australia, Brazil, Germany, Israel Lebanon, New Zealand and Spain, it would not be easy to assemble them in one place and in one time.

Besides, awards cost agencies so much already we don’t want to add to the burden. Just as submitting work to Directory is free, so the Directory Showcase Awards are free.* Perhaps in 2012 we will create some sort of online presentation.

When it came to putting a jury together, naturally we wanted Steve to be the chair but when we wrote to him he replied, “I'm very flattered to be invited to be a judge of your inaugural awards. However, I'm not sure I'm the man for the job.”

He suggested that “instead of talking to me and the old lags” we should be talking to younger, more digitally aware creative people.

Soon afterwards, our editor went to spend a day at the School of Communication Arts, established by the philanthropist Marc Lewis. And, in meeting the students, he found a jury which he believed would look at the work not just with fresh eyes but with a complete absence of cynicism and prejudice.

When he sent in their collated results, Marc wrote:

“My excitement is that the students have delivered a brief on time for the first time so far. They enjoyed judging for The First Directory Showcase Awards and were able to manage themselves, delegate responsibilities, research the body of work, discuss, decide and stick to their decisions.

Thank you so much for setting such a superb brief. It was a genius way for them to absorb hundreds of great ideas, discussing them amongst each other and forming opinions.”

We want to thank him. For providing a jury which is clear about what they regard as outstanding work and why.

There was a lot of witty, even funny, work for the students to look at; big campaigns with big budgets from big above-the-line agencies. But in every category they have seem to have identified the simplest of ideas, which often were as direct in manner as they were in media selection.

We were surprised by some of the decisions but troubled by none.

(It was revealing that UK work won only one Silver and one Bronze out of the 19 awards selected.)

Lastly, thanks to Jenni, Corryn and Lewis Jack, Victoria, Matthew and William, Rory and Emmanuel, Mar, Carolina, Oliver and Sam, Ross, Ana and Hilmi, Nathan, Thomas and Jack M for reading all 16 issues of Directory and selecting your winners.

Their video statements about their experiences judging the work can be viewed at www.directnewideas.com/directoryawards