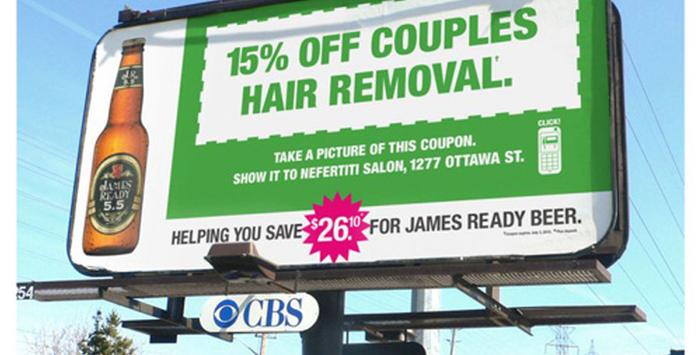 Digital is now no longer a single category but pervades many others. While there are 726 purely digital award winners in 2010, of the 1253 direct campaigns around half are digitally-based. Most of the 236 ‘alternative and innovative’ campaigns listed and just about all the 250 integrated winners have a digital core.

So it is intriguing to see traditional ad. agencies in every position in the Top 20 agencies list except at 15= and Farfar Stockholm.

While Almap BBDO’s position at No.1 is largely due to its expertise in press and poster media, with work for Billboard, Havaianas, VW, EPA and Greenpeace, the rankings reveal how adroitly many large agencies have responded to the changes in the media landscape. Few have been more adroit than BBDO New York and AMV BBDO London, both of whom won more awards in other categories than in traditional TV and print media.

Both these agencies are actively attempting to work to a new advertising model, creating ideas people can participate in, lean-forward communication, if you like. BBDO New York won awards in alternative & innovative, outdoor, media, direct, promo & activation, integrated, design and digital categories as well as in press and TV. AMV BBDO similarly won awards across all categories, including radio whereas Y&R New York’s success is due largely to lean-back entertainment films both online and in TV. That said, Tony Granger’s appointment as worldwide chief creative officer has had a noticeable effect both on the group’s flagship agency and the network, where strikingly mould-breaking work is emerging from the group’s Tel Aviv, Johannesburg and Sydney offices.

BETC Euro RSCG were responsible for one of the most-viewed Youtube ads of the year with Rollerbabies for Evian; and Wieden+Kennedy also had an internet sensation with ‘The Man Your Man Could Be Like’ for Old Spice, an idea they migrated brilliantly into social media as well.

Around the world, agencies have changed their structures and their cultures to be able to compete. The losers, by and large, are the specialist digital agencies, many of whom are being used as production houses rather than as creative originators. The exception is Farfar Stockholm, whose work for Nokia, principally, helped it climb 111 places between 2009 and 2010.

The top networks are:

The top countries are:

The top countries for Direct:

The top countries for Digital:

The top countries for print/press:

The top countries for TV:

The biggest leap in rankings is Sweden, largely on the back of digital campaigns. Four of the world’s Top 5 digital campaigns are Swedish with Kokokaka Gotheburg’s ‘Bluebell Spring/Summer Collection website’ leading the way, Forsman & Bodenfors’ ‘Facebook Showroom’ for IKEA at No.2, VW ‘Fun Theory’ from DDB Stockholm at No.4 and Farfar’s ‘World’s Biggest Signpost’ at No.5.

Also the United Arab Emirates have improved their showing with arresting work from Memac Ogilvy Dubai and Y&R Dubai in particular. In fact, UAE is the leading country in the world for Print/Press advertising.

Top 20 campaigns in the world – across all media

The Top 10 DIRECT agencies in the world are:

Shackleton and Ogilvy Frankfurt were early adopters of integration and both have, for the past five years, produced consistently outstanding work in the Direct category, Shackleton perhaps having a greater digital expertise.

Ogilvy Frankfurt won awards with no fewer than 20 different ideas and Shackleton with 13.

BMF Sydney is as capable of skillfully targeted direct mail campaigns as it is of creating web-based brand-response campaigns such as ‘6 Beers of Separation’ for Tooheys.

That said, it is the brand-response campaigns, almost always revolving around video content, that win the big international awards. Only one piece of direct mail won Gold at Cannes in 2010, for instance.

Both Abbott Mead Vickers BBDO and BBDO New York are now totally integrated agencies in as much as they are both creating advertising that is doing well in all categories at different kinds of show. For instance, AMV BBDO won Digital awards at the Webbys, was Direct agency of the year at Cannes and produced the UK’s No.1 TV commercial for Guinness with ‘Bring It To Life’. Similarly BBDO New York is producing great work in what used to be called ‘below the line’, especially with its interactive work for HBO, ‘Imagine’ and ‘Wall of Secrets’.

Farfar’s big winner in 2010 was the ‘World’s Biggest Signpost’ for Nokia, which was a digitally direct idea and the No.1 direct campaign in the world.

Ogilvy Sao Paulo’s position is down to three campaigns – the ‘Whopper Face’ idea for Burger King, the ‘$73,000 Bar Tab’ campaign they created for a minimal budget for Bar Aurelia and GRAAC ‘Donate your Website’.

While Memac Ogilvy Dubai was not a big winner at international shows, it performed exceptionally well in regional awards shows with ‘Dustvertising’ for Castrol and campaigns for Volvo, The Economist and self-promotion for themselves.

Not one agency in the Top 10 is a dedicated direct marketing agency.

To find one you have to look as far down as No.16, where Proximity Portugal makes a showing, with di Paola & Asociados at No.19 and RMG Target Dublin at 20. The Irish agency won only minor awards at international shows but gained its position by winning a disproportionately large haul of awards at home.

In comment online and offline around the world, some traditional DM agencies have been resentful of advertising agencies winning ‘their’ awards. However, Guy Bradbury, creative director of Touch DDB in London, told Directory it was “Good for us all in direct agencies because it not only raises the bar creatively but it shows clients what can be achieved with appropriate budget.”

That said, direct mail has not been completely superseded. Serviceplan’s work for Bang & Olufsen, the No.5 campaign, when they got top opera artistes in Germany to sing the annual report, used mail as the activator of an integrated campaign, as did CP Proximity Spain’s ‘Composing Your Life’ idea for Audi, No. 11, and Leo Burnett’s ‘Photochains’, No.13.

The Top 10 DIRECT campaigns in the world are:

Top 10 Alternative and Innovative campaigns in the world 2010

These rankings come with a health warning. The data has not been cleaned as effectively as we would hope. Some awards shows do not publish the names of winners. In many cases, the awards entries are filled in incorrectly and names go missing. And in logging the details of 5,600 awards, it is possible that any one of the Directory team can have made a mistake.

The rankings give an indication of how people are performing rather than a picture of pinpoint accuracy – and are published more for fun than for anything.

To find out what your personal ranking is in 2010, email [email protected]

The Directory Big Won has been tracking awards across all media categories since 2006. Prior to that, as The Won Report, it was an annual analysis of awards won specifically in the field of Direct Marketing.

The Big Won is edited by Patrick Collister, publisher of Directory magazine and creative resource (www.directnewideas.com), and former Executive Creative Director of Ogilvy London and of EHS Brann.