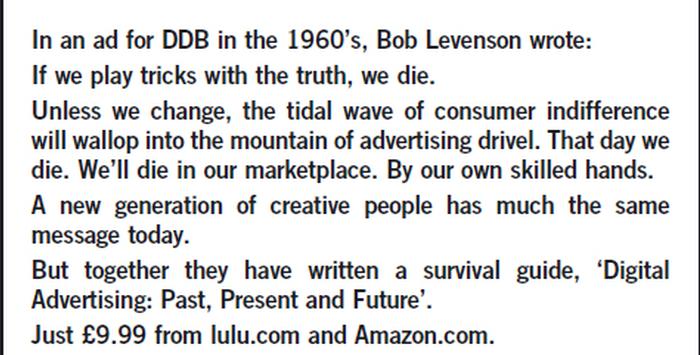 Your Brand is an Ape - Chris Clarke

In the community age, brands must know how to behave if they want to be experienced.

David Ogilvy is quoted as saying, “the consumer is not a moron, she's your wife.” And yet for years the majority of advertising has patronised, flattered and shouted its way to our attention from its protected position within a closed and arrogant media.

But we know that already, it’s been said time and again by industry leaders from both sides of the digital fence. Yet rather like Mark Twain, who once said “Reports of my death have been greatly exaggerated”, advertising is not going to disappear. Neither will the rise of the internet kill TV nor will mobile slay print ads. Viacom will not any time soon or in the future hand their lucrative outdoor sites over to graffiti artists like Banksy and his mates.

The future belongs to brands and agencies who understand that nothing new totally displaces the old.

It belongs to smart creative thinkers who know how to create a coherent compelling experience from the deracinated remnants of old media and the vibrant shifting communities of the new.

For those seeking work in the agencies of the future, this offers huge potential but only if they’re prepared to give up the mono-media mindset that says it’s all about TV and posters.

It’s not media innovation that has changed things, it’s a fundamental shift in the behaviour and expectations of consumers.

Put simply, if you’re going to enter into the social environment of digital communities, you have to behave like a person who wants to be liked. It means that in a world where no one media overrules another, you need to consider the experience your brand offers across channels, not just the impact of a TV ad.

Both of these points verge on stating the bleeding obvious, yet there are too few examples of the right kind of work out there to suggest that many brand managers are thinking this way.

The internet has changed the marketing landscape. Online advertising has surpassed cinema, radio and outdoor and is now hot on the heels of TV. And any marketer worth quoting in the pages of the trade press knows that consumers have become elusive, prone to ignoring most of the 3000 ads they’re exposed to each day.

So what’s changed, then?

It’s all about consumer control. The web empowers individuals to control their media landscape as never before. With this control comes a lower tolerance of interruptive advertising and a greater demand for interaction.

The implication for old advertising is clear, cling to the shouty interruptive formats of the past and be ignored, take advantage of the interactive potential of digital channels and enjoy the spoils.

With consumers congregating in communities, happy to disclose their most intimate secrets online, the new world is not impenetrable and its denizens are certainly no brand avoiders. Rather, the role for brands is to enter those communities in a relevant engaging and human way. Like a bore at a party, talking endlessly about yourself won’t win affection.

This gives rise to the fundamental difference between old and new forms of advertising. Where old advertising demonstrates the product proposition using actors or pictures, new forms help potential consumers experience the proposition for themselves.

At its best, this new paradigm offers brands the chance to enter into or even create communities online, providing rich brand engagement, generating high levels of awareness and shifting lots of product.

To do this effectively, each piece of communication needs to be aware of its role within the network or community. Figuring this out isn’t complex, it mirrors human behaviour in the real world and relies on the “you scratch my back I’ll scratch yours” principle, which is also clearly visible in all interactions between apes (ever watched chimps grooming?).

Known as the “value exchange” it is the fundamental principal of the new advertising. This value exchange can take many forms.

For some brands, the creation of deep content-rich community experiences is not relevant. In such cases, for example in the provision of grudge purchases like insurance and utilities, the value exchange is all about relevance and convenience. A well-placed text ad within a search listing, leading to a seamless, easy purchase is all the consumer wants.

In this instance, the role of the brand can be seen as The Butler, discreet, but there when needed, fast, efficient, subservient to your needs, and happy to bugger off as soon as the job’s done.

However, our lives would be fairly dull if we simply surrounded ourselves with willing manservants. So for a select few brands, there is a chance to be The Entertainer. In this space, there is and will always be a thriving role for TV-like video spots. Cadbury’s fortunes were revived in 2007 by a Gorilla drumming along to Phil Collins , so the old TV format is doing well. But in a world where appointment TV is dwindling, spots must try harder than ever to entertain, and will increasingly be judged by their star rating and view number on You Tube as much as by their on-air reaction.

Some might say there’s a limit to the depth of relationship you really want with a chocolate bar but, in truth, following the principal outlined by Chris Anderson in The Long Tail, there is a niche to be exploited online which can number thousands of motivated people.

If you’d visited Cadburys.com at the time of the Gorilla ad phenomenon, you would have been given an opportunity to see the ad again, but nestled amongst some truly awful design and a bunch of brochure-style articles about chocolate.

How much more powerful could the idea have been if Cadbury’s had tried to convert even a small number of visitors to the site into loyal brand advocates prepared to convert others?

In spite of its success with Gorilla, Cadburys was not able to create a brand experience that extended beyond the immediate buzz of the spot.

If you want an example of a brand which has gone further than entertainment and offered an experience which can be viewed as a service, look at the marketing phenomenon that is Nike +.

The running community uses the power of Apple and Google to create a global community of runners, providing social interaction, and training efficacy whilst stimulating sales of tracks on iTunes and pairs of Nike shoes.

Arguably the best example of value exchange to date, this hugely successful property points the way to a future where service, product, experience and community come together cohesively. And it doesn’t get more “Just Do it” than a whole community encouraging you to get out there and run.

Here the longstanding brand DNA, encapsulated in an endline, is brought to life with a digital brand experience.

But for all its success and the soundness of its strategy, Nike + still retains some of the trappings of old marketing. The site itself is something of a walled garden, forcing the user back in under its terms not theirs. So Nike, ever the pioneers, have taken things further with Inside Nike Running, a content-rich environment, allowing for greater user interaction and for the crucial distribution of content outside of the Nike environment.

Nike, perhaps more than any other brand apart from Apple, understands the importance to the modern consumer of a cohesive experience.

Where Nike + gives consumers control and community around running, Nike ID allows for the personal customisation of the footwear product and the store brings it all alive in the physical environment.

With brands exploring boundaries in this way, the opportunities for creative people to push themselves and their ideas have never been greater. Here the brand acts as The Motivator, stimulating groups of people into action.

In a world of climate crisis and increasing awareness of the impact of our lifestyle on the planet, a new burden has been placed on corporations and brands to make a difference.

This opens the door to some fruitful forms of value exchange, where marketing budgets can be put to good use improving the world we live in rather than simply cluttering it with ad messages.

American Express have done just this with The Member’s Project, a digital brand experience designed to re-invigorate the notion of membership which has always been the cornerstone of the Amex brand. With a pledge to donate $4m to a good cause chosen by its members, American Express turned the idea of marketing expenditure on its head. Rather than talking about themselves, Amex was able to demonstrate the power of membership through the interests of its members. The campaign leveraged “traditional” channels to drive awareness of the activity, but the centre of gravity was very much the web experience where members and potential members could suggest and vote on worthy causes.

Here was a major corporation recognising the need to create experiences beyond the broadcast message, allowing consumers to express their interests while the brand presents its message in a relevant way. The winning project will provide clean drinking water to communities in Africa. How fantastic it would be if other major brands could spend a proportion of their budgets in this way, creating a virtuous circle of marketing objectives, consumer interests and corporate social responsibility?

Perhaps the best opportunity for expansive creative thinking offered by the digital world is in the field of Alternative Reality Games (ARG). Here the brand really can operate with a personality, combining the Entertainer and The Motivator, and ending up as kind of elusive Trickster.

Perhaps the most famous example to date has been “The Game” from Nokia, which ran in various forms from 1999 to 2005. Yet pioneering agencies like Entertainment 42 set up by ex-Microsoft executive Jordan Weisman have been innovating in this space for years.

With the advent of 3G mobile networks and the interactive capabilities of devices like the i-phone it is likely that the rich interplay between the physical and virtual worlds offered in ARGs will become an increasingly important way for brands to cut through with certain tech-savvy audiences.

For instance, Entertainment 42's client, alternative rock band Nine Inch Nails, developed a massive ARG to promote their new album. Frustrated by the limited opportunities for expression offered by digital music formats like MP3, lead singer Trent Reznor wanted to create an experience which could truly engage his fan base. The ARG itself is so big and comprises of so many different media types that it’s  impossible to figure out alone, so by its very nature it taps into the collaborative power of digital communities, creating a great deal of conversation and buzz around the band. (Nine Inch Nails ARG - http://www.ninwiki.com/Main_Page)

In a world of consumer control, brands are learning the humility to behave more like people than as didactic organisations. Those that get it right provide a powerful value- exchange based on a real understanding of what they can offer relative to their audience and communication objectives.

Such brands are able to create engaging Brand Experiences with the potential to enrich people’s lives. In a future where advertising has to work ever harder to capture attention, the role of brand communication, and, specifically the creative task, will become ever more important.

But for the creatives who succeed, they will need an ever broader range of skills, from the writing abilities needed to create eye-catching TV spots and the business acumen to spot the opportunities for branded services such as Nike + to a deep understanding of how consumers engage with different devices and media.

The job has never been harder nor more worthwhile. And for those hungry enough, the door is wide open.